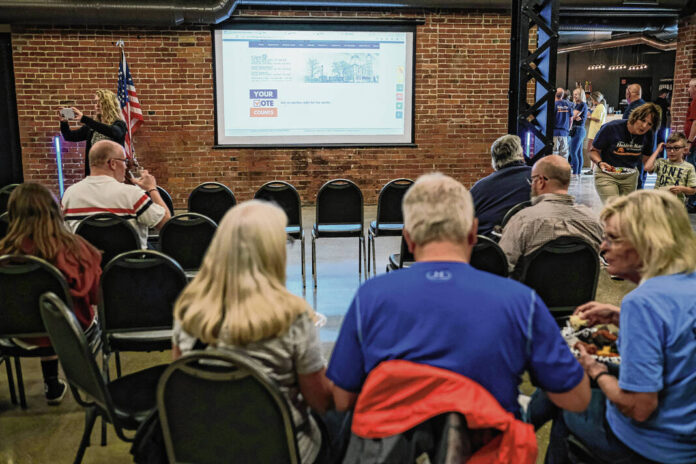 Four years ago, Scott Bonnell won his first GOP primary election after reporting no contributions and no spending.

But this year, the county councilor for District 1 found himself in a three-way primary fight.

When all the ballots were counted, Republican voters chose Greg Patterson, 54, over Bonnell to be the party’s candidate in the fall election. Retired Cummins Inc. employee Dave London was also a key opponent.

Well known for refereeing youth sporting events, his charity work and his commitment to his church, Patterson said he was able to use these avenues to receive help from several people he knew personally and professionally. .

Patterson was also praised by a number of county officials for speaking to administrators from all county departments.

“I (also) prayed a lot, asked God for advice and did what I thought was the right thing,” said Patterson, who also praised his main opponent for his willingness to put his name on the ballot.

Patterson advances to the November election, where his opponent will be Democrat Joshua (Shua) Cobb.

In what turned out to be the closest countywide race, Leah Beyer narrowly defeated incumbent Greg Duke in Tuesday’s Republican primary. This gives the German township resident her party’s nomination to run in the District 2 race for Bartholomew County Council.

Beyer, a cattle producer and agribusiness marketing expert, didn’t know until the final results were texted to her that she had defeated Duke, a career deputy sheriff and school resource officer chosen by the heads of the left late last year to fill Laura DeDomenic’s term. The fact that German Township was one of the last polling centers to report on Tuesday night made things tense, Beyer said.

“It was nerve-wracking because I knew Greg was also from German Township,” Beyer said. “But I love that I was able to take the most dramatic race and win.”

Beyer is perhaps best known for her work with 4-H and the over two years where she volunteered for the CFO’s regulatory committee, which developed regulations for large-scale animal feeding operations.

During her campaign, Beyer said she believes strategic priorities should be put in place to maintain our infrastructure, adding that the county also needs to help ensure the assessed rating continues to grow with more businesses and of industries.

Currently, no Democrats are running for the position. The party has until July 5 to fill the vacancy on the ballot.

Mark Gorbett had a pretty eventful 65th birthday on Tuesday.

After fellow Republicans sang “Happy Birthday” at the Otter Creek golf course at a GOP event, voters gave the two-term former sheriff their own gift: the Republican nomination for a third term. consecutive to Bartholomew County Council.

Gorbett, who has been a strong advocate for raising employee wages in line with a commissioned wage study, scored a decisive victory over 39-year-old Cummins employee Derick Olson;

After successfully running for public office in five previous primaries, Gorbett had considered retiring from politics. He said the decision to seek another term on the council was a family choice – not just his.

“I’m so blessed and have so many friends to lend support to the Republican Party,” Gorbett said. “I just feel comfortable that I have always done the right thing for the voters in our community.