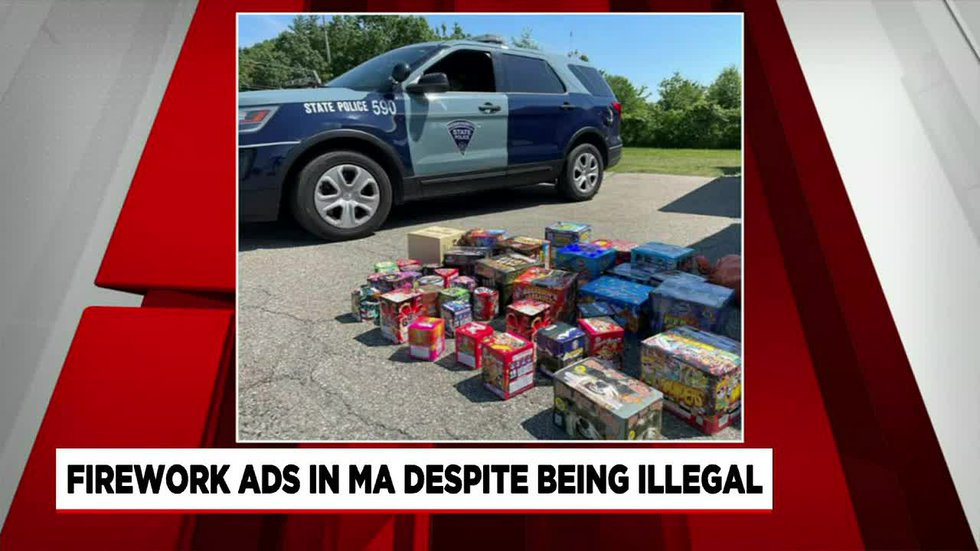 SPRINGFIELD, Mass. (WGGB/WSHM) – As July 4 approaches, the temptation to set off fireworks is greater than ever, but it’s illegal in the Bay State.

Western Mass News decided to get answers from local officials about why so many billboards in our area advertise the illegal product sold in border states.

Over the past week, Massachusetts State Police have seized more than a thousand illegal fireworks from drivers crossing the border from neighboring states ahead of the July 4 holiday.

“It is illegal to bring fireworks across the state line, and there are very stiff penalties associated with that,” state Rep. Orlando Ramos told us. “I don’t know why people take that risk. I don’t think it’s worth it.”

Billboards for out-of-state fireworks can be seen scattered across busy roads, intersections and highways in Massachusetts.

We spoke with Rep. Ramos who said that while fireworks are illegal in Massachusetts, it is not illegal for border states to advertise the product.

“It’s worth having a state-level convo to see if there’s anything we can do, if it’s necessary, especially with the states that border the Commonwealth, making sure that they don’t bring fireworks across the state line,” he said.

Rep. Ramos told Western Mass News that the city of Springfield has been aggressive in cracking down on illegal fireworks and could be passed statewide.

“Last year the city council passed the petition that was sponsored at the State House by my colleague Rep. Pupulo that tied the fireworks fines to people’s driver’s licenses, so that’s something thing happening in the House that could potentially come out in the next session,” he told us.

Rep. Ramos said that as a result of this petition, the city has seen a decrease in the number of calls about illegal fireworks.

Springfield Police spokesman Ryan Walsh confirmed this to Western Mass News in a statement that reads:

“The number of 911 calls for fireworks is down sharply from previous years. In June 2020, we had a peak of 2,000 calls for fireworks. In June, we only received 55 service calls. We urge our residents to leave the fireworks to the professionals, and if officers are called to your home for a fireworks display, they will be confiscated.