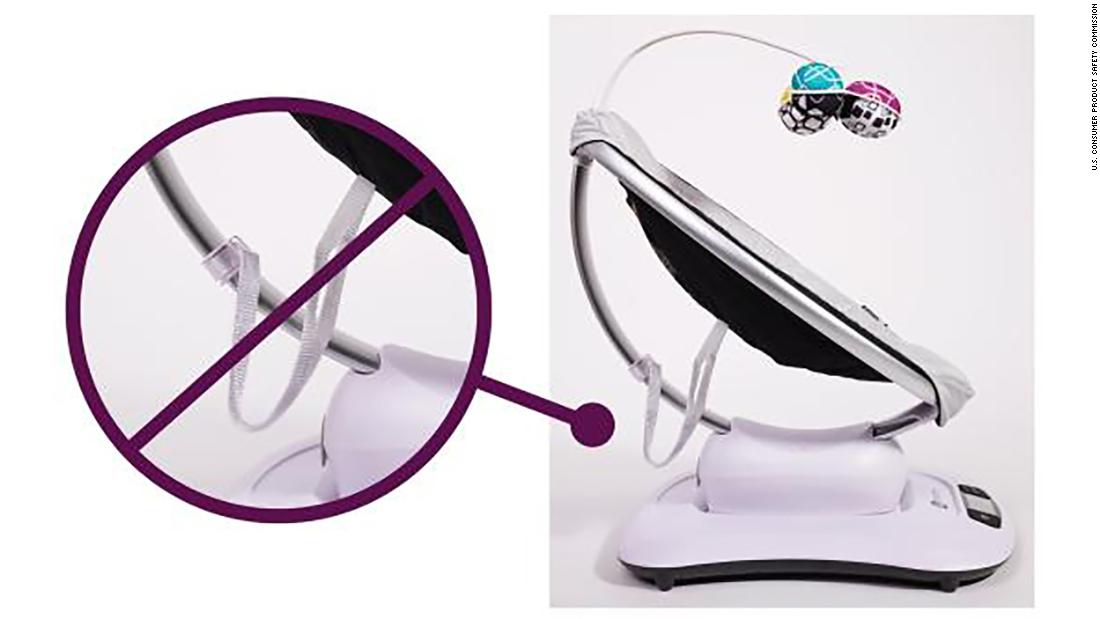 4moms, which makes products for young children, has issued a recall of its MamaRoo Baby Swing — versions 1.0 through 4.0 — and RockaRoo Baby Rockers, the CPSC said.
“When the swing or rocking chair is not in use, its restraint straps can hang below the seat and non-occupant crawling infants can become entangled in the straps, posing a strangulation hazard,” the report said. CPSC.
The recall affects 2 million MamaRoo swings and 220,000 RockaRoo swings, according to CPSC information. The CPSC also reported that 60,000 MamaRoo swings and 10,000 RockaRoo swings have been sold in Canada.

“4moms has received two reports of entanglement incidents involving infants who became entangled in the strap under the unoccupied MamaRoo infant swing after crawling under the seat, including a 10-month-old infant who died of asphyxiation and an infant 10-month-old baby who suffered bruising to his neck before being rescued by a caregiver,” a statement from CPSC and 4moms said. “No incidents involving the RockaRoo have been reported.”

The statement from 4moms and the CPSC recommends that those who own the products “immediately stop using the recalled swings and seesaws, place them in an area where crawling infants cannot reach them, and immediately contact 4moms for s sign up for a free webbing clip which will prevent the webbing from extending under the swing when not in use.”

Baby swings and bouncers have been the subject of a number of recent recalls. Kids II rocking sleepers were linked to five infant deaths and Fisher-Price Rock ‘n Play sleepers were linked to more than 30 infant deaths over 10 years.
TJX agreed to pay a $13 million fine earlier this month for selling the products at TJ Maxx, Marshalls and Home Goods stores from March 2014 to October 2019 after they were taken off the market.